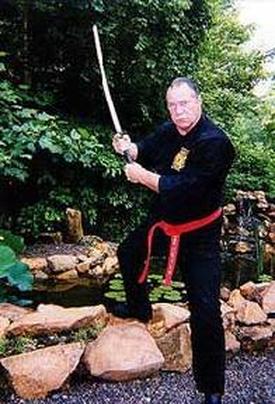 Grand Master Ken Penland, Hanshi 10th Dan was an avid martial arts practitioner and enthusiast. He was the Chairman and founder of the International Shorinji Ryu Jujitsu Federation. He began studying martial arts as a boy in the 1950s. His first instructor was his father who was a member of the US Army and a black belt in both Karate and Judo.

In 1962, Sensei Penland met Ed Parker and started training in Kempo Karate. About this same time he struck up a friendship with Harley S. Reagan and began training under his direction in Judo and Jujitsu. Penland then enlisted in the U.S. Army and was an Airborne Ranger serving in Vietnam in 1967 and 1968.

Later, in the mid 1970s Sensei Penland trained under Grand Master Fusei Kise in Kenshinkan Shorin Ryu Karate and Kobudo. He eventually served as a regional director for this organization. He then became affiliated with Grand Master Yuichi Kuda of the Shorin Ryu Matsumura Kempo Karate Association and served as a director of this organization as well.

He conducted extensive research on the martial arts and co-authored two books. The first is the Bubishi Martial Art Spirit and the second is the Shorinji Ryu Jujitsu training manual entitled Warrior Jujitsu.

He has also been featured in a series of videotapes on Shorinji Ryu Jujitsu. Through his efforts in his martial arts career, he attained the rank of Hanshi 10th Dan, the highest rank in Jujitsu and 9th Dan in Shorin Ryu Karate and Kobudo, 5th Dan in Kendo and 6th Dan in Judo.

Up until his death in October, 2006, he served as the chief martial arts instructor for the Los Angeles Police Department's Jujitsu and defensive tactics dojo and the head instructor for Hanshi Usera and all of his students.  Thank you O'Sensei for your leadership and friendship. We will all miss you greatly.