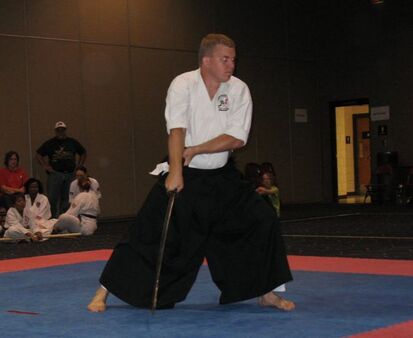 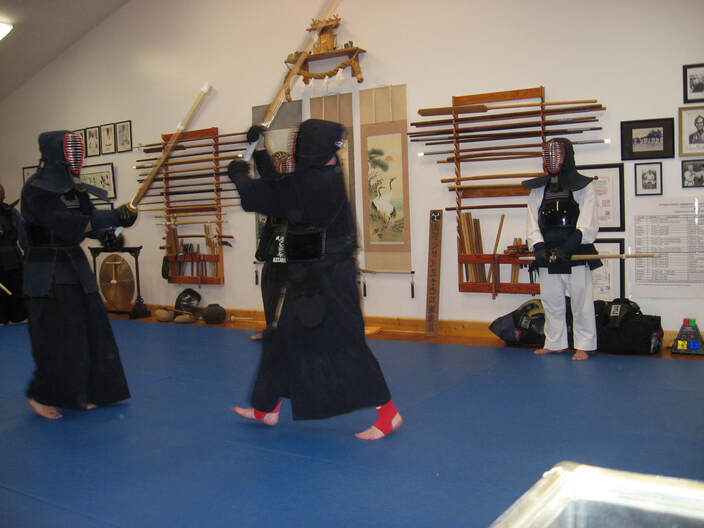 Japanese swordsmanship, known as kenjitsu or kenjutsu, is the sword art of the samurai.  The roots of the art lie deep in the culture and national identity of Japan and can be traced back over 2,000 years. As one of the three sacred objects of imperial regalia (the others being a mirror and a jewel), the sword is one of the most prized possessions of the samurai, and learning to use it was considered one of his most sacred duties. The sword literally helped to shape the history and culture of Japan both by its use on the battlefield and also by the etiquette and culture that developed surrounding its use.  Today, there are over 2,000 different Ryu, or styles, of Kenjutsu being practiced and taught throughout Japan and beyond.

At DMA, we practice a family system of Kenjutsu (or kenjitsu) called Kamagata Ryu.  Kamagata Ryu Kenjutsu is little known sword style from Chiba Ken Prefecture of Japan.  This Ryu, or style, is a battlefield martial art that originated in the town of Edogawa Dai in Chiba Ken just east of Modern Tokyo.  The exact history of the style, like many from the Tokugawa Era, is muddled in time but the art of Iai, or fast draw is a major component of the style.  In addition, Kamagata Ryu is characterized by its use of footwork, evasion, and speed of technique to overcome opponents.  Kamagata Ryu is defined by it's twelve solo kata, and twelve kumidachi, or two man kata, which when practiced with dedication will develop a complete understanding of the use of the Japanese katana.

In addition to learning the kata and kumitachi of Kamagata Ryu, you will also learn the first 10 kata in Eishin Ryu Iaido.  Iaido (or IaiJitsu) is the Japanese art of drawing the katana and striking your opponent with one smooth movement. Eishin Ryu Iaido is one of the oldest styles of this art that was originally created for the elite ruling class of Japan.  Eishin ryu includes techniques from the seated  position (seiza waza), standing positions (tachi waza), partner exercises (kumidachi), and cutting practice (tameshigiri).

The third component of Kamagata Ryu is Niten Ichi Ryu Kenjitsu.  Niten Ichi Ryu is the two sword system of Miyamoto Mushashi, one of the most famous swordsmen of Japan.  This system uses the both the long sword (the katana) and the short sword (the wakasashi) at the same time to allow simultaneous parrying and striking.  This provides a distinct advantage over the more common single sword style and often allows you to quickly overwhelm an opponent.

The last part required to become truly proficient in the use of the katana is free sparring, or keiko.  At DMA, this is accomplished through the art of Kendo, using protective armor and a bamboo sword (shinai) in partnership with the Sioux Falls Sword Academy under Sensei Jesse Adams.  (For more info on Kendo please visit the Sioux Falls Sword Academy website.)  The shinai is used for the safety of everyone involved, because the boken, or wooden sword that is often used in kata training can be just as deadly as a shinken or sharp sword.